hey y’all… i guess i haven’t really been feeling the vegan mofo prompts this year, so i’ve been pretty bad about blogging. so i’m going rogue! i’m blogging about food and i’m not paying any attention to what we’re supposed to be doing today. sorry if i’m being a jerk.

late last week, we got a heads up that a brand new vegetarian (and super vegan-friendly) restaurant was going to be “soft open,” and they were offering their food for half price(!) for the first couple of days. we’ve been waiting very excitedly for this place, so we jumped at the chance and headed over to the beerline cafe for lunch on friday. woo! 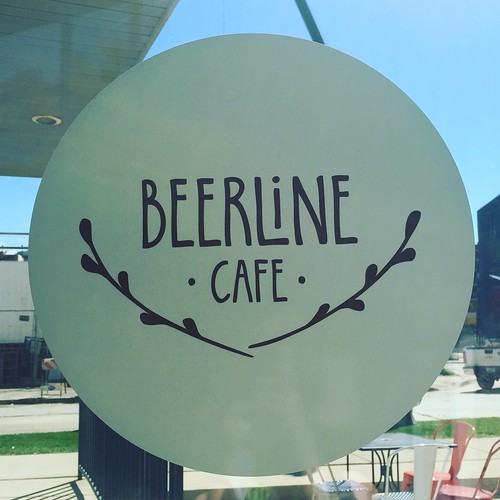 the space is really cute, right next to a yoga studio and in a bustling part of the east side. they’ve used lots of environmentally-friendly construction and they have a cool wall of herbs above the counter, which is pretty nifty. 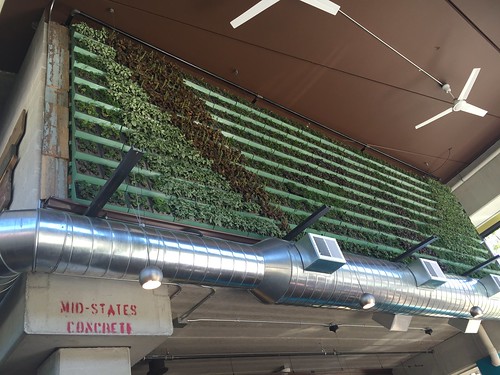 because all the food was half-price that day, we decided to try several different things. we started off with drinks — erik had an iced tea, and i (of course) had a chai.

for starters, erik tried the house salad, which has spring mix, grape tomatoes, avos, pickled julienne carrots & cucumbers, and homemade croutons… all topped with a smoky tomato vinaigrette dressing. i had a bite or two, and it was really tasty! 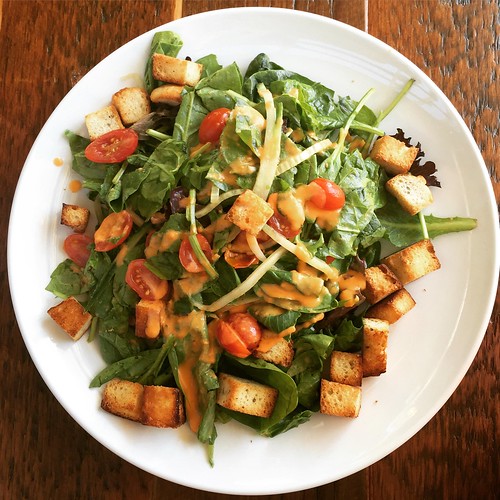 i ordered the avocado hummus, which came with oven-baked tortilla chips, and really packed a garlicky punch. we were a little worried about the number of chips (i.e., there weren’t all that many), so we made a point of creating heavy scoops with each chip, which worked out in the end. 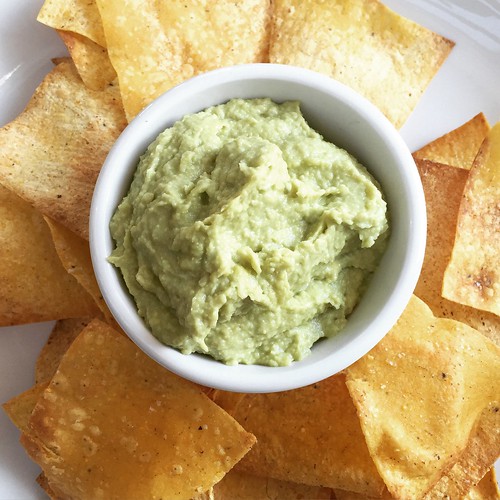 then for the main event, we each tried one of their crepes — erik went the savory route, and i chose sweet. erik’s was called the diner breakfast, and included vegan kielbasa, sautéed veggies, vegan cheese, and avocado (in place of eggs). served with a dollop of fancy dijon mustard on the side, and i’m not sure what the drizzle was, to be honest. they forgot to include the avocado on his, which was a bit of a bummer, but i think it was just because at first they accidentally made us a non-vegan version (i.e., it showed up with eggs) and then when they re-made it, they were probably hurrying. no big deal. i had a bite (i avoided the mushrooms, har har) and it was very good. 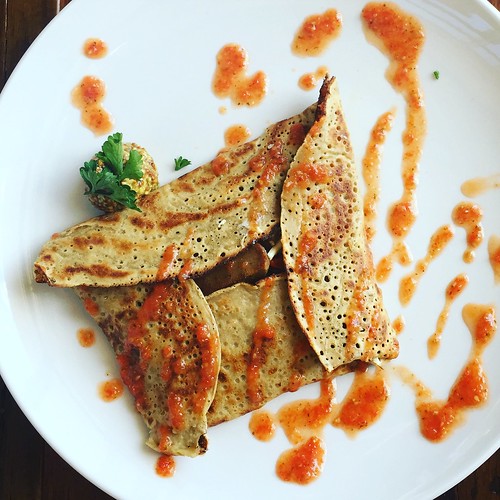 i was having a rough time deciding on which sweet crepe to order — so many of them sounded fantastic! — but eventually i settled on the crepe ape, which is peanut butter & jelly & banana. what?! right up my alley. it came with toasted almonds sprinkled on top, and it was absolutely delicious. 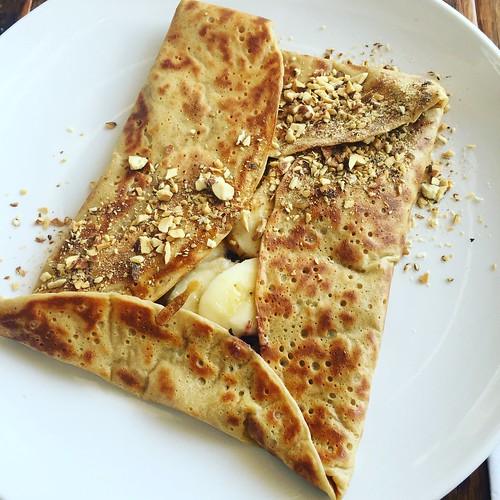 we didn’t order any sides this time, because of getting two starters and not knowing how big all of the servings would be, but on a return trip i’d probably order a side of roasted potatoes with a crepe, just for a little extra. still, we definitely got enough to eat! we were, however, intrigued by their smoothie options, and so we decided to continue taking advantage of the half-price excitement, and we ordered one of each smoothie to go. 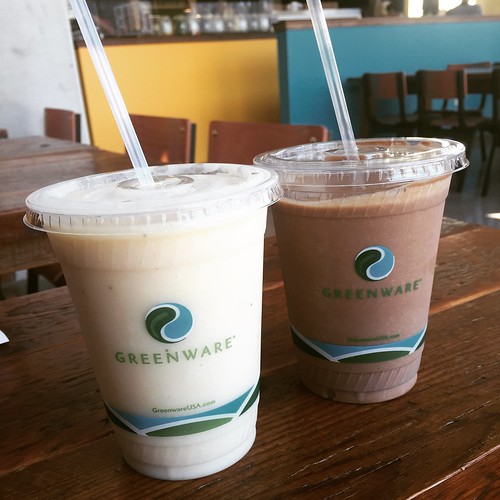 on the left is the grapefruit banana smoothie, which is made with rice milk, and on the right is the cayenne chocolate avocado smoothie, which was by far my favorite of the two. i’m really not the target audience for the grapefruit banana, because i don’t like grapefruit at all (heh) and i’m also not a fan of rice milk (i find it too watery). the flavor profile for this one just wasn’t for me, but erik liked it, so it wasn’t a total loss. the cayenne chocolate avocado was great — we both really liked that one — and erik said it reminded him of the mexican hot chocolate snickerdoodles from VCIYCJ. he’s not wrong; it has that same creamy chocolate flavor, followed by that little punch of cayenne. yum!

all in all, it was a nice first visit and i’m looking forward to going back. there are several more crepes i’d love to try (both sweet and savory — but mostly sweet), and also a panini or two. i’d also like to check out their other starters, salads, and sides. i’m so excited for a new restaurant with so many vegan options — i hope things go well for them!

vegan, professor, goofball. living with one husband, one kitty, and one greyhound.